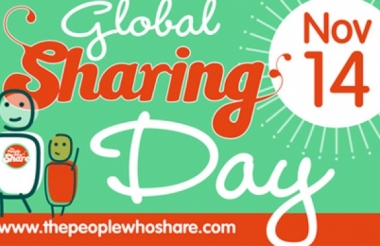 As the economic downturn has tightened people’s resources, we’re seeing a renewed interest in downsizing and living with less stuff. Even those still making good money are questioning whether working excessive hours to be able to acquire more is the key to happiness. Add the obvious environmental benefits of accumulating less, and the idea of owning less becomes even more compelling.

So how do you live with less stuff while still ensuring you have what you need? Well, you simply share.

According to Milicent Johnson of Shareable, the popularity of the “sharing economy,” or “access economy,” is evidence of a shift in our society from having to own something to getting the services that the thing provides — in other words, we’re moving towards valuing access over ownership. This access can be provided through companies, like Airbnb, individuals pooling their purchasing power, or local communities coming together to increase their resilience, as popuphood is doing in Oakland, CA.

What’s led to that shift? Neal Gorenflo of Shareable believes the two most important factors are the financial strain brought by the recession and the access to affordable resources enabled by new technologies like smartphones. In fact, for many young people, the smartphone is now the liberating technology and coming of age totem, not a car. For the first generation raised on the Internet, sharing offline is a natural extension of sharing online.

As Gorenflo points out, “Over the last decade we’ve used the Internet to connect people to information, then to each other with social media, and now the net is connecting us to and re-ordering the brick and mortar world in fundamentally new ways. A great example is Airbnb’s new neighborhood product, which is innovating a completely new way to travel that connects users to neighborhoods in authentic ways.”

You may already be participating in the sharing economy, or you may be hearing about it now for the first time. But whether or not you’re aware of it, sharing has gotten huge — so much so that this week brought us the first Global Sharing Day. On November 14, millions of people around the world met up to share meals, books, old clothes, and more — as well as to promote the idea of sharing and plan the future of the movement.

Sharing stuff means that not everyone has to buy a power drill — or even a car. If you need to get somewhere, you can use a car-sharing service like Zipcar or borrow a car from a neighbor with RelayRides. Wonder why cars with pink mustaches have been spotted around San Francisco? The mustache is a signal that the driver is a member of Lyft and can give you a ride to your destination, for a small donation or none — it’s up to you.

And while you might save money by using a car only when you need it, those who do buy cars and other items can make money while sharing. The same principles apply to tools, apartments, workspaces, and any other resources that can be shared. The emphasis tends to be on resources that are of high value but may not be used all the time, such as cars and real estate. You can even share your time and skills via sites like TaskRabbitand Skillshare.

Sharing is also about more than just stuff — and crowdfunding takes sharing to another level. Crowdfunding can take many forms. Maybe you want to be part of the growth in renewable energy but can’t put solar panels on your roof. People have participated by sharing their resources to help to fund a solar project through a crowdfunding platform at Mosaic. In the future, people may even see a return on their investment.

According to Kate Drane of the crowdfunding site Indiegogo, the trend is born of necessity: people with projects and ideas need investors, and before crowdfunding it was hard for individuals to make these investments. Indiegogo allows anyone to raise money for their project and anyone to share their dollars to make those projects happen. And it’s about more than just sharing dollars — it also creates connections within these sharing communities, enables dialog with users, and provides valuable feedback on a project. As people tap into both their own community and their community’s associated communities, the potential of a campaign is amplified, taking the project to a whole new level.

Indiegogo and other crowdfunding platforms embody the sharing economy because as Drane says, they’re “all about harnessing the power of community to make things happen.” Going beyond sharing material things or dollars, they harness the power of “shared enthusiasm.”

And there’s plenty of enthusiasm not just for these projects but also for sharing itself. While it might be necessity that leads people to share, once they try it, many find it a better and more social experience. I can attest to that myself: I’ve been holding clothes-swapping parties for years, and they’re more about the social experience than even the fun of getting new free clothes.

All this is just a fraction of what people are sharing — in fact, the possibilities seem limitless. As more of us reevaluate the need for accumulating stuff and experience the benefits of sharing, the movement is bound to prosper.