This post was originally published on The Energy Collective.

Although electric cars aren’t exactly new, the first ones having been built in the late 1800s, they’ve taken a while to catch on. In recent times, consumers were limited to odd-looking vehicles that couldn’t go far or fast—except for those few individuals with enough money to buy the luxury Tesla sports car. That’s changing with the upcoming introduction of mainstream electric cars like the Nissan Leaf, and mostly electric ones like the Chevy Volt. On a recent weekend, the San Francisco Bay Area Green Drive Expo offered a chance to see some of the latest in this technology and to learn more about what’s coming. 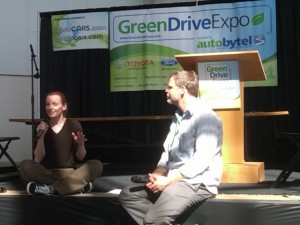 Why has it taken so long for electric cars to become mainstream and within the reach of the average consumer? The answer isn’t simple, as revealed in the documentary Who Killed the Electric Car? While it’s tempting to blame the oil companies, and they’ve certainly played a large role, widespread deployment of the electric car has also been stalled by other factors, such as consumers’ skepticism. Chelsea Sexton, featured in the documentary and now an electric-car advocate, discussed some consumer worries in her keynote:

These issues and others need to be addressed by good marketing. Early adopters, prevalent in the audience at the Green Drive Expo, are crucial in showing that electric cars are a viable alternative. People have different reasons for wanting electric cars—financial, technical, environmental, sometimes even a coolness factor. But as Sexton noted, “I don’t care what brought you to the table—I care about the table.” We need to get electric cars on the road and make them mainstream. And now we’re finally taking real steps in that direction.